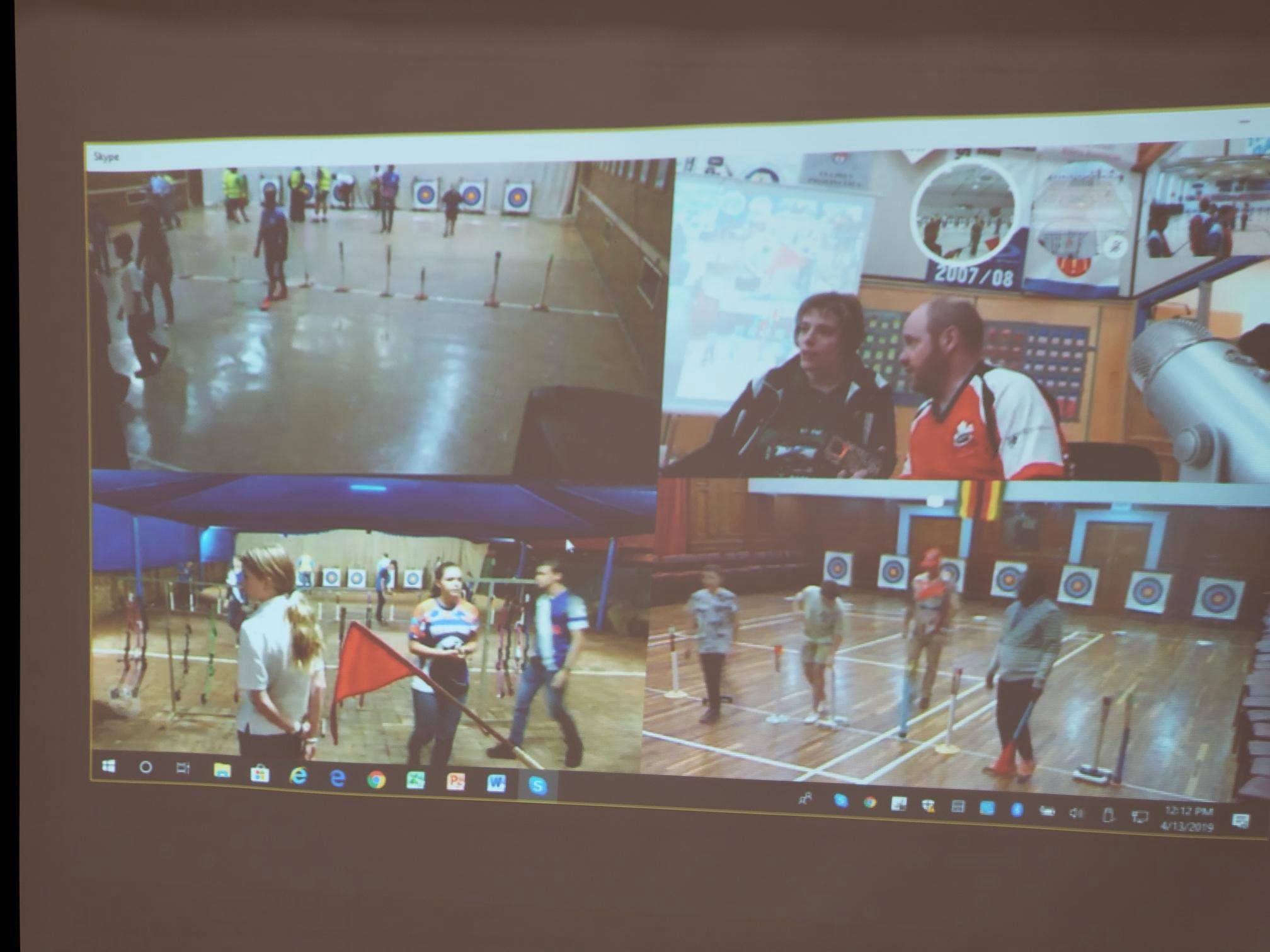 In 2019, how do you visit with a loved one thousands of miles away? Skype, of course! A KyNASP® archery team in Richmond, Kentucky had a unique opportunity this past weekend to utilize the use of Skype in a fun, educational way. They participated in an International Skype NASP® Tournament with multiple countries including Canada, Zimbabwe and South Africa.

Along with a big screen, projector, camera, and speakers, Model Laboratory archers were able to watch the archers from multiple countries on the screen as the participants on the screen viewed them. Together they competed in an archery tournament meant for the record books. Some countries proudly displayed their country’s flag where others were seen shooting outside at a late hour. Many questions were raised like; “If it is noon here in Kentucky, what time is it in Zimbabwe?”, “Do you think they shoot outside in the dark under a lighted tent on a regular basis?”, “I wonder what it would be like to go to school in South Africa?”

Model Laboratory School’s archery coach Michelle Smith met Canadian coach, Hal Ziprick at the 2018 All-Star Tournament in Calgary, Alberta, Canada last year when her son, Joshua Smith competed for the USA Team. From that experience her family got to know archers from all over the United States, Canada, South Africa, and Namibia. Smith said, “It was a wonderful experience for my kids to be able to connect with other kids from other countries who share a love for archery. They still keep in touch with many of the archers on social media.” Hal Ziprick contacted Smith in February to invite her team to join the International Skype tournament he was hosting for the weekend of April 12 – 13. When archers and parents were informed about the opportunity to compete in an International Skype tournament they were very enthused and excited.

Over the past few weeks, Model coaches were in contact with Hal Ziprick to make sure they had the equipment necessary. They also did a practice run through on the Thursday before to check to make sure our connections were operating properly. A special thanks goes out to Model’s assistant coach, John Lange who took care of all the technical details to make the tournament a success.

“It was great seeing friends from around the World and making so many new ones. I truly do believe that NASP® changes not only archer’s lives’ one arrow at a time but societies. The addition of the Skype portion was the talk of our tournament with so many people amazed that we were able to have people join our tournament from around the world.” – Hal Ziprick with H.A. Kotash School, Alberta Canada.

Prior to the beginning of each flight the archers got a chance to see and communicate with the archers from the other countries. All the whistle commands were coming from Canada. So all the archers were shooting in unison. A projection screen was set up that had live feeds from all the other countries that were participating. Teams from Zimbabwe, South Africa, Canada, and the United States competed in the tournament.

Next year a plan to expand the tournament is already in the works to allow other local schools to join in on the fun. They are also planning to connect via Skype in future practices to allow for more interaction between archers to build connections and friendships.