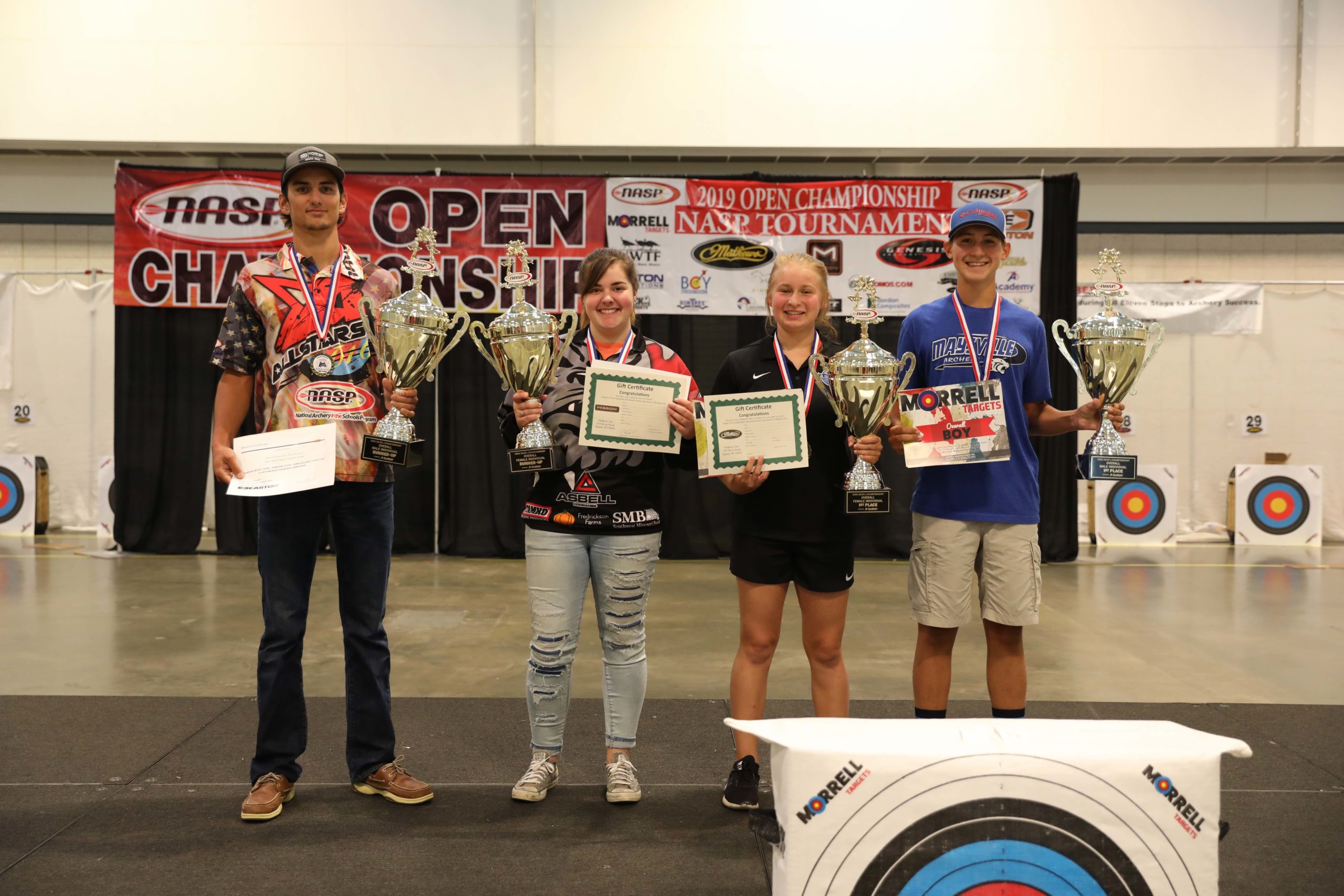 Nashville, Tennessee, known for its country music and barbecue, opened its doors to the 2019 National Archery in the School’s Program Open & Championship, July 25th-27th. This isn’t the first time Nashville has welcomed NASP®, and this year Music City Center was on fire with archery enthusiasts, spectators, and competitors for this 3-day venue that held six different events including the NASP® Bulls-eye Open, NASP® All-Star Championship, NASP® Bulls-eye Championship, NASP® IBO/3D Challenge Open, NASP® IBO/3D Challenge Championship, and finally the NASP® Scholarship Shoot-Off.  Once known as the NASP® World Tournament, the new Open Championship allowed students who had never been invited to a world tournament or who had never participated in any NASP® tournament, to attend and compete on the first day of the tournament, the “Open” on July 25th. Those who shot well in the “Open”, advanced to the Championship portion of the tournament on the 26th & 27th.

The competitive format was identical to all NASP® tournaments where students release five practice arrows followed by fifteen scored arrows at each of the ten and fifteen-meter distant shooting lines. Archers shoot bare-bow style without the help of sights or release aids. The highest score possible is a 300 with 30 tens.

789 student archers shot in the bullseye “Open” on day 1, with 113 qualifying to advance to the championship, 106 did so.  As spectators waited with anticipation, archers stood-by for the first two whistle blows signifying to “Get Bow”. Once the single whistle blast sounded to “Shoot”, 200 arrows arced towards the bulls-eye. At the conclusion of each 75-minute flight, bubbled score cards were collected by range officials and electronically scanned for internet posting.  Top individual and team results are posted below.

What makes this year’s championship a little more unique is that, archers who had either not advanced from a national tournament or who had never participated in a NASP® tournament, got to shoot for spot in the Championship during the “Open”, first day. Tommy Floyd, Vice President of NASP® says, “NASP® is thrilled to have offered our first ever “Open” Tournament. This tournament did not require any prior participation or qualification from a separate NASP® event. We want to establish an opportunity for any NASP® student that has participated in NASP® at their school to experience the atmosphere of one of our large tournament events. With 789 students participating in the 2019 Open, we are thrilled…but we know that there are so many others out there that could benefit from this wonderful experience. We are asking anyone who knows of a NASP® archer near them to make sure they know about the Open!”

The overall male shooter from the Open went to Mason Kamlitz, a 10th grader from Oakes High School in North Dakota. He shot a 294. The overall female went to Savannah Sadler, an 11th grader from Norwood R-1 School in Missouri, posted a 296. Not just a fun fact, but another amazing outcome to this year’s tournament was a shooter who won overall female in the 3D Open, also advanced to the championship and won overall female in the elementary division there as well. Mia Cornelson shot a 289 out of 300 points! Roy Grimes, President of NASP®, reflected on this moment. “It was so exciting to see one of the “Open” contestants, Mia Cornelson, advance from the open to the championship and win it!” For more of the “Open”
results visit: www.nasptournaments.org

On Friday and Saturday, after Thursday’s “Open”, the Championship event was conducted. The same competitive format was followed as for the “Open”.  Every 75 minutes a new flight of about 200 shooters occupied the range to shoot and score their 30 arrows. Individual and team results for the Championship are as follows:

At the awards ceremony, sponsored by Academy Sports + Outdoors, ties for
overall and runner-up boys and girls were resolved.  Archers tied in other categories were presented duplicate awards.

Following the tie-breakers the very popular and intense “NASP® Scholarship Shoot-Off” took place. President of NASP®, Roy Grimes, shed some light on the history of NASP® scholarships. “Early in NASP®’s 18 years of existence, scholarships were established both nationally and in states and provinces to recognize noteworthy achievement.   Top team scholarships were rewarded for performance at the Nationals in Salt Lake City, UT and Louisville, KY this past April and May.  However, individual scholarship levels were determined at this Open Championship in Nashville via a shoot-off. This year 17 archers were called to the shooting line in front of hundreds of spectators. Each archer shot a 5-arrow practice end at 15 meters. Then the archers shot 5 arrows for score. If ties persisted among some archers, they shot a single arrow at the same target. The archer’s arrow closest to the very center of the bullseye won the tie.  These are the winners of the shoot-off and the cash amounts they earned for post-high school education:

Music and barbecue remain popular in Nashville, but the city will be remembered by thousands of families as a great archery destination.  Congratulations once again to all of the archers who came out, supported by their teachers, coaches, and family, and gave it their best!  For more information and complete tournament results see: www.naspschools.org

Previous Post: « Archers and Athens Collide at the 2019 Open & Champions
Next Post: We want to honor all of you, that have lost so much. »