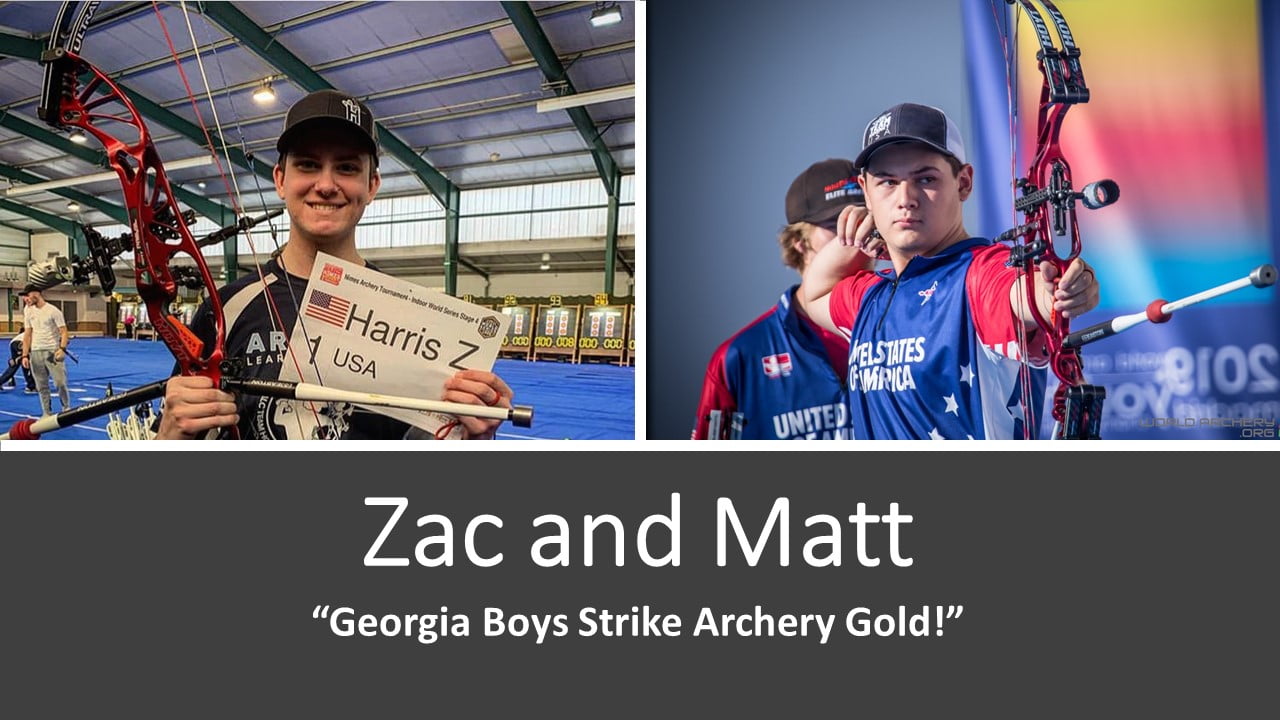 Dreams can become reality with hard-work and perseverance. Zac Harris and Matthew Russell, who attend Loganville High School in Loganville, Georgia, know better than anyone else. Back in December of 2017, Zac Harris, a senior at Loganville HS, was awarded a spot on the USA Archery Junior Male Indoor Team. After shooting on this team for approximately a year, Harris went on to compete in the 2018 World Archery Indoor Championship, in Yankton, South Dakota and was awarded a team gold medal against Australia. Like Harris, Matthew Russell, a Junior who also attends Loganville HS, was also awarded a spot on the USA Archery Cadet Male Outdoor Youth Team this past summer. Russell went on to compete with USA’s Archery Youth World Team located in Madrid, Spain. Matthew and his compound team won the gold medal in a team round against Denmark. A huge congratulations to both young men! Of course, their archery journey didn’t begin there. It was a several year journey that began for both Zac and Matthew, back in Middle School when they discovered the National Archery in the School’s Program (NASP®). For Zac it was finding a sense of purpose. “I decided to try out for the NASP® team at Loganville Middle School after moving schools. I was very interested in the sport, and it provided me a chance to get involved.” He also said that by joining NASP®, “It helped me make friends after the move, and it gave me a purpose.”

Matthew actually began the NASP® program in Elementary School. When Middle School rolled around, he tried out for the archery team in 6th and 7th grade but did not make the cut. While disappointed, Russell didn’t allow this momentary defeat to discourage him. He says, “I decided to pursue archery beyond NASP® when I didn’t make the school team in 7th grade. I had practiced and worked really hard to make the Middle School team. I was very disappointed but wanted to continue archery.” Russell continued by saying, “I decided I would go to the Archery Learning Center in Snellville, GA, where I thought I’d just do lessons and try to make the school NASP® team next year, in 8th grade. As I started doing more lessons and the coach, George Ryals IV, noticed how determined I was to do archery, he offered a JOAD (Junior Olympic Archery Development) style competition bow fully set up so I could shoot at JOAD tournaments. The more I shot it, the more I fell in love with archery and the further I went—even making the NASP® team in 8th grade.”

Zac also learned about archery opportunities beyond NASP® when he was in the 7th grade. In fact, one of his middle school archery coaches had a son in the Hornet Program in Snellville, GA, and she also referred Harris to that program. This is ultimately how Zac began shooting archery outside of NASP® and has led him and Russell to traveling and competing at World competitions. It all began with NASP®.

When asked what Zac and Matthews’s future goals are, their answers were nothing less than aspiring and some of their goals have already come to fruition. Russell says, “My future goals are to become a professional archer and shoot at international events at a champion level. I would love to keep myself in archery whether I’m coaching, owning an archery shop, or working for an archery company.” Like Russell, Harris also wishes to keep archery in his future as well. “My current goals are to have a professional archery career and continue my current position at UltraView Archery as a product engineer. Archery will play a role in my future as it does in my career and hobbies.

Like with most students, NASP® is a place where aspiring archers become archers and future goals are set and met. NASP® has a long-standing reputation for allowing kids, from all walks of life, to be accepted and part of a team, to achieve goals they never thought could be achieved, and to dream higher than ever before, whether that be pursuing archery after HS, traveling and competing world-wide, or simply just attending a college. NASP® gives kids the confidence and tools that can be used long after graduation.

Both Harris and Russell have fond memories of being involved with NASP®. Both of them say their fondest memory is making the team back in Middle School. For Zac it was getting to be a part of an archery team, something he has never done before and being accepted. For Matthew it was making his 8th grade team and traveling and hanging out with friends. He says, “win or lose, archery friends were always there to be supportive and to have a good time.”

So, whether shooting competitively for gold or back-yard target practice, rest assured both of these young men have proven that hard-work and dedication can make dreams become reality.